The ability to create absolutely lifelike digital humans also unlocks the potential to bring back deceased public figures with staggering detail and clarity. Whether a departed leader or celebrity, it can be comforting and truly powerful to see a beloved person revived in a respectful, realistic manner.

For New Dimension Productions (NDP), the ability to recreate H.H. Sheik Zayed Bin Sultan as a digital human was clearly a meaningful project. Dubbed the Father of the Nation by the United Arab Emirates, Sheikh Zayed was brought back to life as a 3D hologram by NDP, spreading his values and messages to a new audience – with facial animation provided by Cubic Motion.

Developed in 2018 to mark the Year of Zayed and 100th anniversary of his birth, the hologram recreates one of Sheikh Zayed’s most popular speeches. NDP worked from archival footage to analyze his movements and facial subtleties in an effort to capture every nuance of Sheikh Zayed’s personality. The character rigging and 3D modeling firm, Snappers, was brought in to create a 3D model and they, in turn, recommended Cubic Motion to provide expert facial animation capabilities.

“We were aiming for the highest photorealistic facial animation services. We wanted a partner who can provide the facial animation side of this business,” said Hasan Hina, Managing Partner and Producer at NDP. “We like to cooperate with leading partners, rather than starting everything from scratch n-house, because there are vendors in the world who have done their homework for years and reached a level of advancements in terms of tools. Whether a musical concert, game, or TV commercial, we trust that Cubic Motion can handle the animation.” 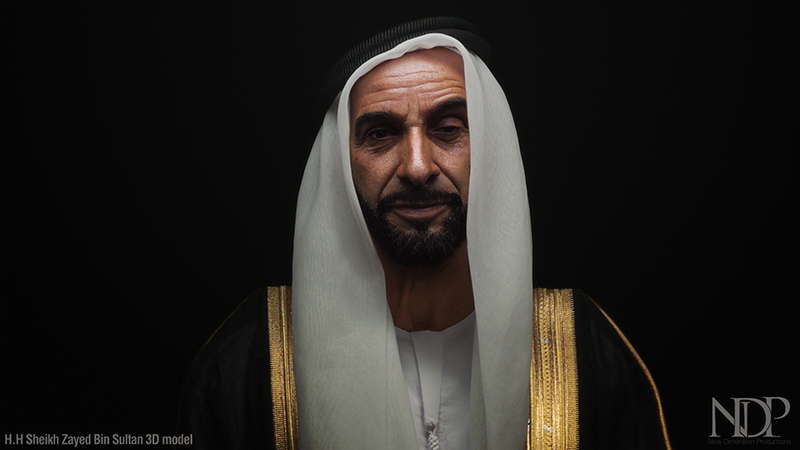 Cubic Motion’s computer vision PhDs are specialists in facial capture and facial animation, with more than 15 years of experience translating performance capture into seamless and utterly lifelike digital humans. The studio’s proprietary techniques ensure that every minute detail of the performer’s face is recreated in the animation, which can then be applied to a CGI film, video game, or any other medium.

Even when using a less-than-ideal video source, Cubic Motion was up to the task of translating that footage into the supplied rig for Sheik Zayed. “There was originally a very noticeable shake as the camera was moving,” recalled Hina, “but Cubic Motion actually gave us solid results without going back to do the reshoot.”

For NDP, the appeal of working with Cubic Motion was not only the skill at which they produce facial animation, but also the team’s ability to meet demanding deadlines and adapt to changing needs and timelines. Hina praised the experience of working closely with Cubic Motion executive producer David Barton on the project.

“We are investing so much in creating the experience, while he was creating the technical side of the facial animation,” said Hina. “David was very informative about what we could do and how we could make things faster, producing results in a more agile manner. It’s very convenient to work with Cubic Motion because we’re getting what we want, at the right time, with the highest level of personality.”

Going forward, NDP sees a future in real-time animation, potentially cutting down on production time while still delivering the kind of lifelike, realistic performances seen with pre-rendered footage. The studio aims to tap Cubic Motion’s experience in this realm—most notably their contributions to facial animation for the first truly real-time digital human, Siren, produced in collaboration with 3Lateral, Epic Games, and Tencent for GDC 2018.

“We’re trying to overcome last-minute approvals and tight timelines, so we have been discussing how to deploy a real-time solution with Cubic Motion,” said Hina. “They already have a very successful system ready for implementation. This will cut down production time by at least 50%, giving us more flexibility and the availability to produce more content.”

NDP sees a world of possibilities using holograms like this, recreating national icons from the past for use in concerts, plays, and other demonstrations. The studio also hopes to raise awareness of cinematography in the Arab region – the fact that 3D animation can elevate storytelling in movies and series production. Cubic Motion was more than happy to help NDP in their mission.